The Present IS the Future: Real-Time Marketing In the Era of the Stream – Part One

Posted on June 7, 2013 by Nova in Miscellaneous, Technology, Web/Tech | Leave a comment

The pulse of the Net has gotten faster. It’s not a static Web of documents anymore, it’s a new real-time messaging medium we call the Stream.

The Stream is unlike any form of live media before it: It is a completely real-time, globally distributed, two-way conversation. And it’s already changing everything we know about marketing, advertising, branding and PR.

For marketers – and particularly for brands and agencies – mastering the Stream requires a new set of approaches, new tools and new practices. Like the similar shift, over two decades ago, from traditional media to digital media, this shift is both an existential challenge and a potentially destiny-changing opportunity.

Some organizations are learning to master the Stream faster than others, and they will be the leaders of tomorrow. But even those that lag will have to adapt soon, or they will become irrelevant by 2016. It’s evolve or die, all over again.

The Clock Rate of the Net is Speeding Up

One of the things that makes the Stream different from the Web is clock rate. The clock rate of the Net is increasing.

For the past 30 years we have been trending towards immediacy – the world has been getting faster, and nowhere has this been more apparent than online.

Now we have arrived at real-time and the Net has become a live medium. This changes everything.

Before blogging the clock rate of the Web was slow. Most Web sites were updated less than once per day. News and media sites were updated daily or perhaps a few times a day. Blogging eventually increased the rate of change to the hours timescale. RSS then made it possible to keep up with this change more efficiently – the Web became a gigantic news ticker. But it was still a relatively slow one compared to today.

Starting in 2000, instant messaging and text messaging both started to gain adoption. These shifted marketing from the hours to intra-hour timescale.

Facebook was launched in 2004, followed by YouTube in 2005, Twitter in 2006 and Instagram in 2010. Due to the rapid message-based brand conversations they enabled, social networks sped up the timescale of digital marketing from hours to minutes, and even to seconds.

Since 2000 we have also seen a steady transition from stationary and sporadic Internet access to continuous mobile access, complemented by simultaneous increases in bandwidth and reductions of bandwidth cost.

Everyone is now connected all the time, both as a content consumer and as a content provider. These trends have democratized the Internet from a nearly static and one-way textual medium to a fully live two-way multimedia medium – the Stream of today.

Social media is the new media – it is a new form of media, not just a media distribution pipe, and it is much faster than traditional media in every way.

The Stream is more live and real-time than TV and radio ever were. For example, social networks consistently beat TV and radio to the story. They sense and distribute breaking news and trends ahead of mainstream TV networks and media outlets, often by up to tens of minutes and even as long as hours. 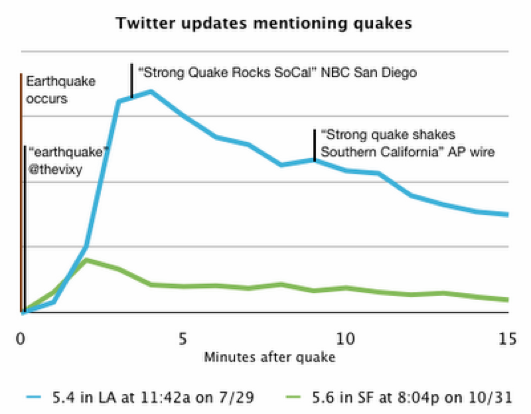 SoLoMo (Social + Mobile + Local Technologies) tech is still in its infancy, but it opens myriad new doors for brands and agencies to begin mining live data. Tracking consumer behavior in real-time paints an incredibly vivid picture of your fans and followers as SoMoLo becomes widely adopted.

The digital native demographic has developed an expectation that their devices seamlessly integrate with the world around them.  As such, Millennials have begun hyper-tasking: operating multiple devices/consuming data from multiple sources at once.

Attention has Shifted to the Stream

Much of the growth of the SoLoMo movement has been driven by increased bandwidth, faster adoption times for smartphones and tablets, but also broader demographics embracing social media.

This produces a phenomenal amount of data – and it’s a challenge to manage and make sense of it, but it’s imperative brands/agencies begin sifting through it all to execute the right kind of campaigns.

The pace and volume of social messages on Twitter and Facebook have been growing exponentially, year over year and this trend shows no signs of slowing down. Attention is shifting from search to social.

Meanwhile attention to the top sites on the Web is increasingly being driven by this social messaging activity or dark social, rather than by Web navigation, Web search and SEO.

Among the top 50 sites on the Web, most get at least equal, if not more, of their traffic from social than from search. In other words, the primary driver of digital consumer attention, brand perception, and engagement has shifted to social. 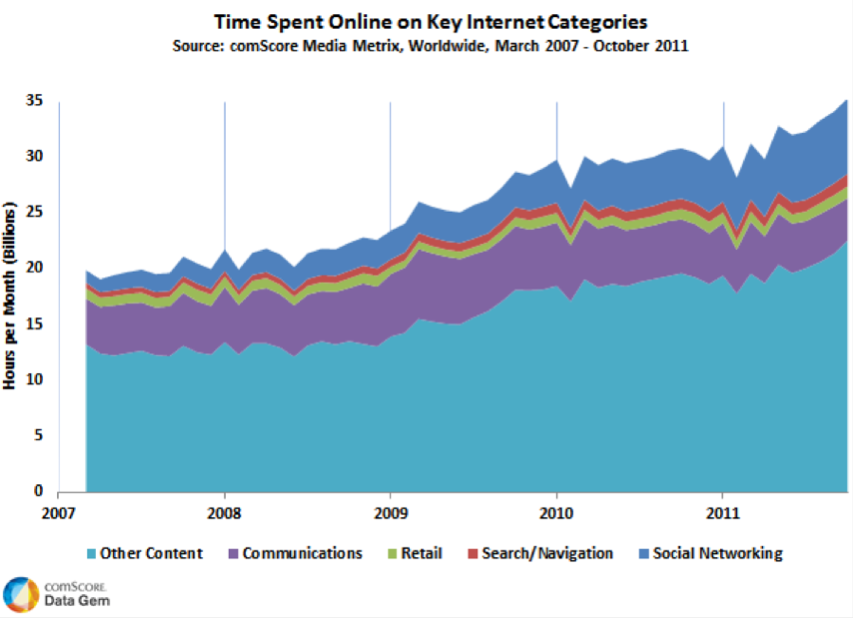 The shift to faster timescales is altering the landscape of marketing, sales and even customer service. Consumers live in the Now, and they are demanding that brands live there too.

This new and growing obsession with now even has its own marketing buzzword called Nowism:

NOWISM | “Consumers’ ingrained* lust for instant gratification is being satisfied by a host of novel, important (offline and online) real-time products, services and experiences. Consumers are also feverishly contributing to the real-time content avalanche that’s building as we speak. As a result, expect your brand and company to have no choice but to finally mirror and join the ‘now’, in all its splendid chaos, realness and excitement.”

Nowism is a cultural shift to a focus on the present, instead of the past or future. It’s new and unprecedented: never before has a civilization on this planet lived so exclusively in the now. 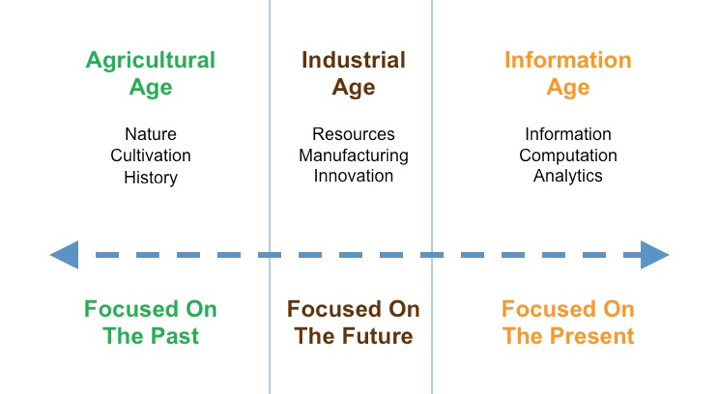 In the information age, thanks to the double-edged blessing of information technology and communication networks, the present has become bigger, faster, and more consuming.

Today we are focused on immediacy and instant gratification. And with these come an expectation of instant response, instant customer service, and instant solutions. This is an era of shoot-first-ask-questions-later, where trends and rumors flare up and go global in minutes.

Now, the risk of being late is greater than the risk of being wrong. And due to this, even experienced media outlets and brands are under pressure to publish or respond as fast as possible, without even time to think or fact-check. It’s better to issue a correction than to be perceived as slow.

To survive and prosper in these faster cycles of activity organizations have to learn to think and respond in real-time, even if it means making mistakes and corrections more frequently.

The present contains more data, and more change, than what used to occur in months or even years of activity. And the present is therefore more difficult to understand today than it was before.

Because there is so much to measure in the present, and we can measure everything in higher resolution, there is vastly more that we must pay attention to at any time. And this means we simply don’t have as much time or resources to focus on the past or the future.

Instead of predicting the future, there is a new option, in the age of Nowism: Predict the present, while it is still unfolding, using an approach called Nowcasting, which was pioneered at Google.

Nowcasting attempts to make sense of the present before all the data has been analyzed, in order to project trends sooner, or even continuously. For example, using nowcasting techniques Google has been able to predict monthly sales, economic indicators, and disease spread in near real-time, before end of month results are usually available.

Nowcasting has been applied by hedge funds, economists, and epidemiologists, and soon it will be a standard tool for marketers. 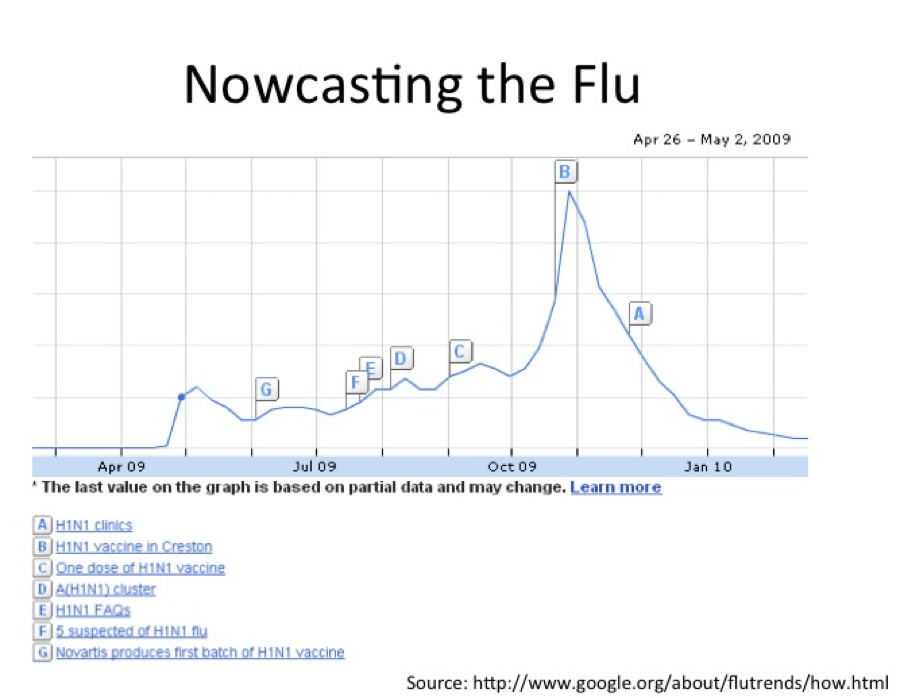 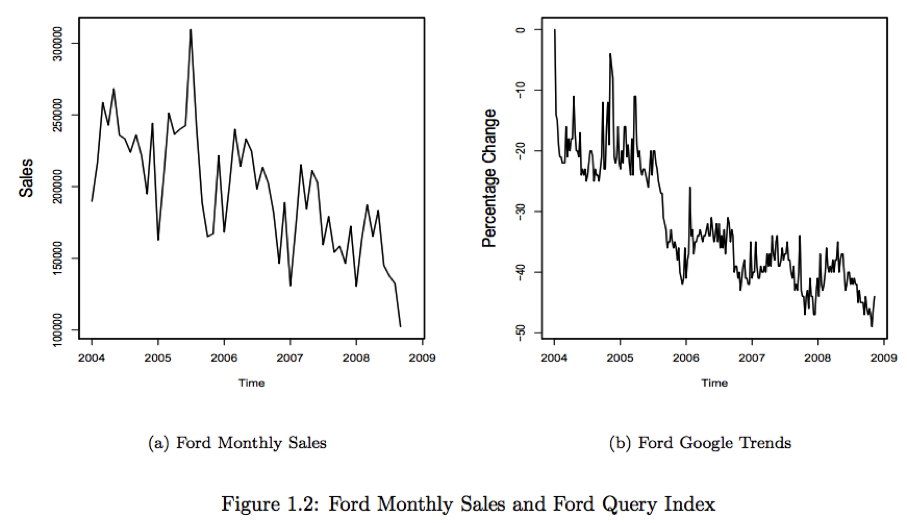 Applying nowcasting effectively is more than simply measuring and predicting events. The opportunity is to use those measurements to then act proactively to respond, create new content, adjust campaigns, and stay one step ahead of emerging trends. It is not reactive, but proactive to opportunities as they develop in real-time.

This of course requires a sophistication and understanding of the present to sense, analyze and act in a way that is substantial and moves engagements forward.

In part II of this series, we will look at how marketing has evolved to its present state in the real-time Web, and how Nowism is necessarily changing the way that marketers work. We will also explore how leading businesses must learn to consider themselves as creators of media rather than simply forces moving within it.

The author thanks Adam Blumenfeld and Phil Ressler for contributions, edits and suggestions for this article.